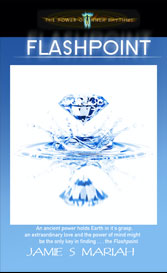 From her earliest memory as a toddler, Avlyn always had the ability to read a person’s heart truth by the white light that emanated from them. Sitting on a blanket in the middle of the kitchen floor, she remembered watching her mother busily washing the dishes. She was fascinated with the flurry created from the millions of the tiny points of light that glowed from her mother as she moved her body about.

No colors or designs, just variations of brightness that shone from the core of a person in a constant blizzard of light in motion. It was simply how she saw people. At that age, she had no reason to question it. It was just what she saw and knew as real.

As she grew, she became aware of what the differences in light meant in people. She noticed the more goodness or love a person exhibited, the faster the flurry and the brighter their light appeared.

As a young adult, Avlyn learned that Quantum Physics proved that all matter—seemingly solid or not—was just energy in constant motion vibrating at different frequencies.

Her parents were good people with a warm glow of light who did their best to raise her with love and appreciation for all life—but they never understood what Avlyn tried to tell them. Or, what she claimed she saw.

It wasn’t until she could communicate more clearly that Avlyn learned it was not “normal” to see people the way she did.

Being an only child, her parents absolutely cherished her. Although they were intelligent people, they could no more understand their child’s ramblings than they understood the deeper workings of the universe. These lights she described and the things she said she could do with water sounded like worked-up stories beyond any child’s imagination—they could not comprehend where these wild stories originated.

When water acted in unusual ways in Avlyn’s presence, it was so far beyond their concepts of reality—they denied what they saw and did their best to ignore it completely.

Avlyn noticed that her peculiar vision disturbed her parents, but she just could not believe there was anything wrong with her. To her, the “strange things” she saw just felt as natural and real as the spring breeze or the warmth of the sun. She felt that if her parents could experience what she did and saw what she saw, maybe they could understand.

Many times, she tried to explain to her parents how the woman at the grocery store who smiled so wide–really had a very sad heart.

Her kindergarten teacher glowed brightly and Avlyn really liked her and at school, even though they told no one—the principal and the 3rd grade teacher Mrs. Plankett—were in love. Whenever they were near each other on guard duty at the playground, they both shot light in a million directions, entangling the other’s light with their own. This light always dimmed and retracted when they parted after recess was over.

Eagerly telling her mother all she saw—as if she might see if she only looked harder—mother would just smile warmly and kiss her forehead as she said, “what a wonderful imagination you have!”

Whenever she spoke aloud in public about what she saw, her father gave her a half smile and a pat on the head as he said, “Okay honey, okay.” She could tell he hoped she would stop saying such things, especially when they were around people crowding an exhibit at the county fair.

Country folk did not take kindly to strangeness.

She pleaded with her parents to believe her when they hired a new man to help on their small Sacramento Valley farm. He had little to no glow coming from him. She knew he was not a good man at all. He made her skin crawl and she felt a deep chill whenever he was near.

Weeks passed and every day before school, she pleaded with her mom to find someone else to help on the farm. She told her mother the man was very bad and begged her to let him go. But it was a small town and good help was hard to find. Besides, what kind of parents would they be if they took the wild imaginative ramblings of a young grade school child too seriously?

Dragging her steps on the way to school, Avlyn reluctantly walked several miles through olive tree orchards, deathly afraid for her parents.

Coming home one spring afternoon, off in the distance, she saw both her parents sitting arm in arm together on their porch swing, heads oddly resting together.

Finding this a strange occurrence in the middle of the day when there was always so much work to be done—she suddenly noticed the odd stillness of the swing.

Avlyn dropped her schoolbooks and ran toward the house. Before she was close enough to see their slack faces, the complete lack of any light shining from them—struck her like a sharp daggar. In that moment, she went completely blank, her legs gave way and her limp body crumpled on the lawn just a stone’s throw from the house.

A few days later she regained consciousness at the local hospital, as a solemn officer with an average glow explained what she already knew.

Her parents were dead.

“I’m so sorry sweetheart. The farmhand who worked for your parents was a deeply troubled man. He killed your parents.”

He choked on the words as he continued looking the young girl in her soft blank face. “They were strangled and propped on the swing like that. It was a cruel twist of fate that you would be the one to find them. He-… he cleaned out all their money and stole everything of any value from your home.”

The Chief of Police shifted his weight to prepare himself for the rest.

The man delivered the final blow.

“Having no known living relatives, Miss Avlyn Shaylee, you are now a ward of the state.” The Chief nodded curtly and left the room.

Avlyn went numb and heard the slow squeak of a rusty swing that turned to a ringing in her ears.

Her life, for the next few months, was a blur as she shuffled from ward to ward, feeling completely lost. Without the buffer of a family who loved her, she began to realize her differences from the other children, and the loneliness was crushing.

Never popular in her old school to begin with, she didn’t think much of it since she always had her parents to listen to her. Even if they didn’t understand all she told them, their complete love and acceptance had always comforted and protected her.

Because she knew it disturbed her parents, she had refrained from much experimenting with her “gifts,” but now that she felt alone in the world, her gifts were comforting old friends and gave her solace.

Although she was an attractive girl, the way she looked straight into a person’s soul was unsettling to possible adoptive parents. Eager couples would meet with her, but once they saw the unwavering steady look in her eyes, they usually found some excuse as to why it wouldn’t work.

Avlyn overheard one pinch-faced and dimly glowing woman say to another, just after another meeting with potential parents had gone awry.“She always separates herself from the other girls—it’s just odd. A sure a sign of future trouble. . .”

Avlyn spent her youth moving between wards and foster homes, observing people’s various lights as they passed through her life. Water was her constant companion, for water alone was the only thing that truly listened to her.

She knew a secret that others did not: water would listen to anyone if they too, gave focus and real attention.